Two of the most common questions I get asked when I show a potential buyer a new lake is “Do they allow jet skis?” and “is there a horsepower limit?”. And the answer to that question can make a break or a buyer on that specific lake. Why? Because jet skis and power boats are some of the most popular items to use at the lake in today’s world. Most people associate jet skis, personal watercrafts, and speed boats as some of the greatest activities on the lake, where you can go fast and feel the wind and water fly around you. Jet skis themselves are essentially motorcycles for the water. Personally, I love jet skis, in fact I don’t want to live at a lake that doesn’t allow them. I like having fun and I like going fast. Honestly it’s the only thing I do at the lake. I don’t fish. I don’t free swim. So trust me when I say that jet skis are phenomenally fun. And I am positive that many people also feel the same way about speed boating. However, a lake that allows jet skis and or has unlimited horsepower may not be for everyone. I say this because as a lakefront consultant it’s my job to pair people with the lake that will give them the most enjoyment and be the best fit for them.

So why wouldn’t you want to be at a lake with no jet skis or no horsepower limit?

For starters not having jet skis and speed boats with high horsepower can make that lake a lot quieter, and with quiet comes peace of mind, not something to overlook especially if you’re looking for that weekend getaway.  Often the thought of going to an isolated cabin at some remote lake with nothing but you and nature sounds appealing. But these types of watercraft can be some of the loudest things at the lake, zooming around like loud mechanical bees and can destroy the idea of that getaway cabin pretty quick. For instance, if you go out to Indian Lake, there are so many speedboats and jet skis running around it can sound some mornings like a giant bee hive. Not a bad thing if you’re a person who is going to the lake for adventure and fun. But if you’re looking for more of that isolated cabin feel where you can take a load off, then being at a lake without the “need for speed” effect, may be something to consider.

The next thing would be just the general lake traffic and congestion involved. It’s simple really, if you’re at a lake that doesn’t allow jet skis and power boats going as fast as possible then the whole family gets on the pontoon boat and enjoys a nice relaxing day around the lake, and maybe waves at another family on a pontoon, or maybe gets out for nice swim. There are lakes such as Candlewood Lake where you can go out on the boat and there is not another boat on the water. Period. Now although they don’t have a horsepower limit, they do forbid jet skis and the difference in water traffic between them and say Indian Lake is highly distinguishable.  The fact is that if you’re at a lake with jet skis and boaters who drive at high speeds, that relaxing day on the water with the family just became a lot more stressful. Now you have to watch for skiers and boaters driving around at high speeds, and now that 250 acre private lake just seemed to get a whole lot smaller. In Ohio many of the lakes aren’t very large in size, especially the private ones, and once you start adding jet skis and powerboats to the mix, the traffic becomes a lot higher and then maybe you’re not so keen on spending time on the water anymore.

The last major thing to cover would have to be the wake. Again it’s simple math; the faster you go on the water, the greater wake you produce. Now, for some, that wake may not be a big deal. However, let’s say you’re an angler, you live for fishing. And you’re sitting in your little boat with your brand new rod and your waiting for a fish to bite and then suddenly your boat starts rocking because somebody just went zooming by at 50 mph shouting “yippie k-yay!” pretending to be a modern-day cowboy; I wouldn’t think that’s all too great for your fishing practices. Now just to be clear all lakes do have no-wake zones so many feet from shoreline and from other boats. However, we all know that those rules do get bent, and again a lot of private lakes are on the smaller end, and those wakes from speed boats and jet skis can travel far. What happens when you are in one of those smaller lakes and your house is on the main water and you decide to do a little swimming right off your dock. Then next thing you know some speed boater comes whipping past maybe pretty close to that no-wake zone and next thing you know you feel like you’re at the public wave pool? I don’t know about you but I was never a fan. Now, is that an exaggeration? Maybe. Would that happen every time? Probably not. But it can happen, and has a higher chance of happening at a lake that allows jet skis and has lax horsepower limits.

Again, jet skis and speed boating are great activities. But maybe the lifestyle associated with them aren’t for you?  Make sure to consult with your lakefront specialist about which lake fits the lifestyle you’re looking for. 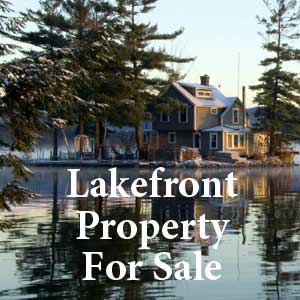